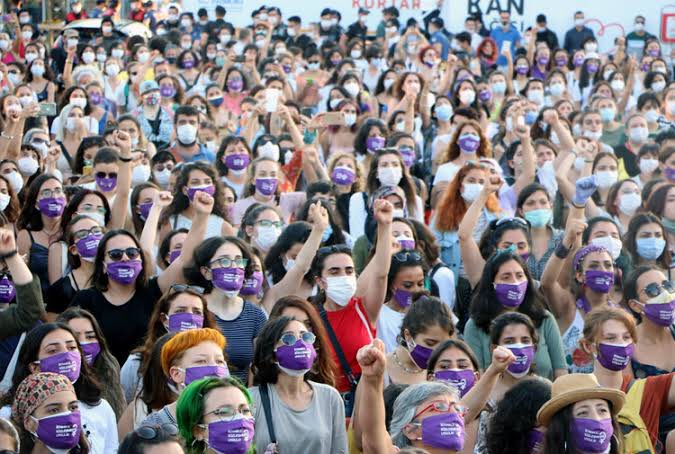 The termination of a Convention to prevent violence removes the basic regulations and mechanisms that hundreds of thousands of women in Turkey can apply to escape from violence.

The Council of Europe Convention on Prevention and Combating Violence against Women and Domestic Violence, publicly known as the Istanbul Convention, is the most extensive convention against male violence against women. On March 20, 2021, the decision was taken to withdraw from the convention in Turkey, where the existence of violence against women and women killings is a major problem. Apart from the fact that pulling out of an international convention that protects women’s rights to walk away from violence is unconstitutional, by making this decision, the government also rejects its responsibility to protect women from violence, prevent violence and punish the offenders. Withdrawing from the convention for the prevention of violence is the removal of the fundamental regulations and mechanisms that hundreds and thousands of women from Turkey can resort against violence. We have previously shared that we do not recognize this unlawful decision against the interests of women and that we will take legal action by filing a lawsuit.

On May 20, 2021, we filed a lawsuit in the Council of State, demanding that the decision to withdraw be halted and that the threat of the repeal of the Convention in Turkey be halted on July 1st and that the withdrawal decision be overturned.

As Mor Çatı, we are filing this lawsuit because, considering the experiences of tens of thousands of women and accompanying children over 30 years, we consider it essential that the Istanbul Convention remains valid and applied unconditionally to prevent the effects of violence against women. Therefore, the cancellation of the Presidential Decree -the administrative process that terminated the Istanbul Convention- is vital to prevent the decision to withdraw from the Convention from taking effect on July 1st, to stop the execution of the decision immediately for women to survive, to live free from violence and to exercise their fundamental rights and freedoms guaranteed in the constitution.

On March 20, 2021, with the publicity of the administrative process for the withdrawal from the Istanbul Convention, countless women asked Mor Çatı what they could do to ensure that the Istanbul Convention remained in effect. On behalf of thousands of women and children who have applied to Mor Çatı because of violence, and who have been supported by Mor Çatı to build a life free from violence since 1990; and the dozens of women who were killed for pursuing cases and not having access to the support they needed in order for the offenders to receive proportionate punishments, defending the Istanbul Convention and following this case are among the primary goals of Mor Çatı today.

The experiences of women who have been abused and the children accompanying them, the extent of violence against women in Turkey, and the lack of existing legal and social mechanisms give us precise data. In the lawsuit we filed in the Council of State, we explained the vital importance of the Istanbul Convention, the difficulties and violations of rights experienced by women and children applying to Mor Çatı in the eyes of institutions and organizations such as law enforcement, court, prosecutor’s office, ŞÖNİM. These violations of rights can be prevented by the 100% implementation of the Istanbul Convention.

It is urgent and mandatory to immediately stop the execution of the administrative process governing the termination of the Istanbul Convention, to cancel it, and to provide the necessary legal environment for the implementation of the Convention.

We have applied for the suspension and cancellation of the execution of the decision because it violates the provisions of the Presidential Decree (article 2), equality before the law (article 10), binding and supremacy of the Constitution (article 11), limitation of fundamental rights and freedoms (Article 13), conformity to international agreements (Article 90) and the duties and powers of the President (article 104).

The Istanbul Convention is in agreement with other international treaties that protect human rights and it protects the principle of ‘Equality before the Law’ guaranteed within the scope of article 10 internationally. The sole purpose of the convention is to end violence against women, gender inequality and discrimination, and domestic violence. The convention defines violence as a major obstacle to equality between men and women. Violence against women in Turkey is one of the biggest obstacles to achieving equality between men and women, both legally and in action. The prevalence of physical, economic, psychological, sexual violence against women prevents women from exercising their political, civil, and economic rights, which are guaranteed by the Constitution and other international conventions today.

Additionally, Istanbul Convention, which was duly brought into force, precedes and superior to the domestic laws, and equivalently ranked with the Constitution, with respect to the statement of ”acceptance of the circumvention of international conventions in the case of a clash between domestic laws and international conventions concerning the fundamental rights and freedoms” of  Article 90 of the Constitution and within the scope of Article 11, which emphasizes the bindingness and superiority of the Constitution.